IRS Lien Withdrawals: The IRS Makes it Easier For Taxpayers 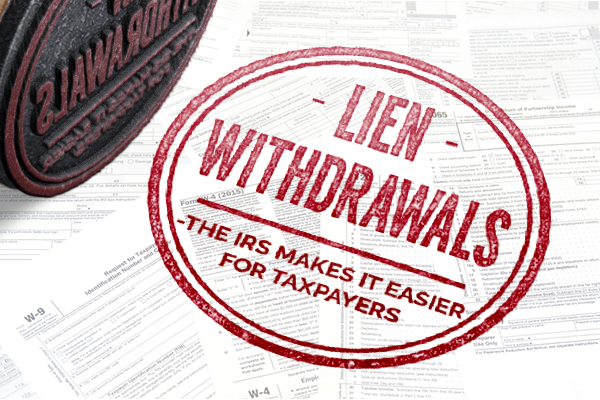 Did you know about this benefit for tax delinquent citizens who have been issued federal tax liens? We want to be sure you do because the IRS steps up in favor of taxpayers by easing their burdens with lien withdrawals. If taxpayers do their part, they can benefit by shortening the time between the imposing of stress-inducing liens and withdrawal with a new approach to the federal tax lien process. Oh, and the government also benefits.

The IRS is making fundamental changes that work for taxpayers. One such change is allowing taxpayers to enter into a Direct Debit Installment Agreement (DDIA). The goal remains the same (collecting the proper amount of taxes) while taxpayers who have taken the proactive step of entering into a direct debit agreement are rewarded.

A Win for All Sides

Even the IRS understands the value of change. By modifying procedures and making it easier for taxpayers to obtain lien withdrawals, the process is a win-win-win situation. The taxpayer wins by being relieved of the lien, the IRS benefits by easing it’s red tape and paperwork, and the government wins by getting paid.

Here’s how it works. Once full payment is made, if a taxpayer requests, the IRS will streamline its internal procedures and allow collection personnel to withdraw liens.

A DDIA allows taxpayers with unpaid assessments of $25,000 (or less) in lien withdrawals under the following scenarios:

After a probationary period demonstrating that direct debit payments will be honored, liens are withdrawn. Taxpayers can use the Online Payment Agreement application on IRS.gov to set-up with Direct Debit Installment Agreements.

This story continues with other pluses, including the lowering of user fees. And the government wins again by saving money on mailing fewer monthly payment notices.